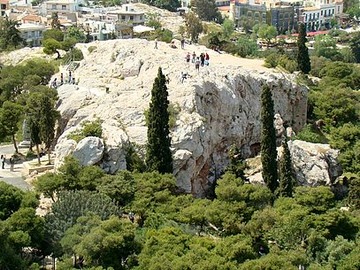 What do you notice that’s different from present-day American religious conversation when reading Acts 17:16-20? It fairly jumps out at me that the people in Athens wanted to know what Paul had to say. They wanted to hear him. What passes for communication today is not the same. People may not mind if you post something near to your heart on Facebook or Twitter, or even if you try to tell them something that you think they need to hear for their eternal well-being. But will they listen? Will they read? Or will they scroll by in their hurry to find something that they really want to hear?

As it happens, the next verse in Acts explains why things worked out as they did in Athens. “Now all the Athenians and the foreigners who lived there would spend their time in nothing except telling or hearing something new.” So Paul gave an impressive and impassioned sermon, and while some of the hearers believed and wanted to know more, many quickly concluded (wrongly) that they had heard enough to know that Paul was not worth any more of their time. Sound familiar?

I’d probably expect a similar reception in today’s university setting, which may be the closest thing we have to Mars Hill in Athens. But in the previous chapter, Paul had much better success in a town called Philippi. There he and his companions brought their message to a place they supposed to be a prayer gathering. Did they think the people there were praying to the living God? Probably not, because it was their first stop in Europe. If Philippi had a synagogue, they would have gone there. At least the synagogue worshippers had the scriptures, but those gathering for prayer in a pagan land would be praying to pagan gods. Or am I missing something? Yet that’s where Paul and company thought to begin speaking about the true God. In other words, they were directly contradicting and correcting their hearer’s deeply-held spiritual views.

And it worked, at least for Lydia and her household. The place they went was outside the city gate at the riverside. One of the things that made this a natural gathering spot would be the riverside itself. I recall somewhere a commentator saying that women would gather in such places to handle the laundry needs of their family. Maybe someone like Lydia would have a slave to do most of the work, but this is speculation. What we see is that it worked.

Is there such a place today? If Lutheran missionaries went to the “place of prayer” in our own American towns and began teaching things contrary to what the people thought was true, how would it go over? It seems that would-be missionaries are under pressure not to contradict what other people believe. Maybe you have felt that pressure yourself.

Or you might say that the present-day gathering place is online. It’s certain many people spend a lot of time there, grazing through a myriad posts but generally consuming nothing. That’s the problem. The message of the Gospel is something that must be presented and consumed. The chief activity with online message board or social media communication is not thoughtful reading, but scanning, scrolling, and maybe reacting emotionally to one or two things. It’s like having an open bag of potato chips on the kitchen counter. By the time dinner rolls around, the bag is somehow empty, and you’re not sure if you’re really hungry anyway.

In a world of incessant scrolling and intensely personalized consumption, how does the Church communicate the Gospel? Thankfully, there is still such a thing as friendship. The most powerful communication is between a Christian and his neighbor. Yet at some point we must cross the invisible line and say something that challenges our heathen neighbor to his toenails. It’s almost certain the Christian will be unfriended. What then?